The top-flight English Premier League football club will have all their teams wear ‘Visit Rwanda’ on the sleeves. 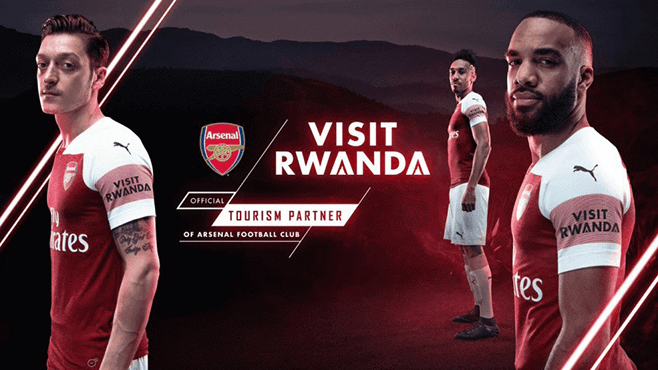 “This is an exciting partnership which will see us support Rwanda’s ambition to build their tourism industry,” Venkatesham said adding that “The country [Rwanda] has been transformed in recent years.”

The three-year partnership will see the new ‘Visit Rwanda’ logo featured on the left sleeve of all first team, under-23 and Arsenal Women’s matches from the new season this August. As part of the deal, Arsenal players from the men’s and women’s teams will visit Rwanda and club coaches will host coaching camps to support the development of the game for boys and girls in the country.

The deal will highlight Rwanda’s tourism offerings such as the National Parks, which are attracting record number of tourists due to growing numbers of wildlife including black rhino, lions, zebra, chimpanzees and the famous mountain gorillas, as well as the investment opportunities in the country.

The Visit Rwanda campaign is not only about tourism. It showcases Rwanda as an investment destination as well.

Rwanda is ranked as the third easiest place to do business in Africa by the World Bank and has been awarded for its leadership in tourism and competitiveness by the World Travel and Tourism Council (WTTC) and the World Economic Forum respectively.

Clare Akamanzi, the CEO of Rwanda Development Board said the country was looking forward to welcoming more tourists and investors

“We’re thrilled to be partnering with Arsenal and showcasing the vibrancy and beauty of our country. Rwanda is a country pulsing with energy, creativity and innovation,” she said.

Akamanzi explained why Rwanda is an ideal investment destination.

“We are the second fastest growing economy in Africa. Investors in Rwanda are able to register their businesses in only six hours and prepare to enjoy the opportunities accrued from the free trade agreements that we’ve signed with over 50 countries.

Visit Rwanda will gain global exposure through branding on Arsenal’s matchday LED boards, interview backdrops and the club’s stadium tour which attracts more than 250,000 visitors each year. They will also have the opportunity to engage Arsenal fans around the world through the club’s social media channels.

Arsenal’s Venkatesham pointed out the magnitude of the exposure Rwanda gets from the deal.

“The Arsenal shirt is seen 35 million times a day around the world and we are one of the most viewed teams around the world. We look forward to working with the Visit Rwanda team to further establish the country as a tourist destination,” Venkatesham said.

The partnership is also being supported by National Geographic who will promote Rwanda as an important tourist destination.